This is little more than a placeholder, really, to note that I am 98% of the way to a working NixWRT test system again. 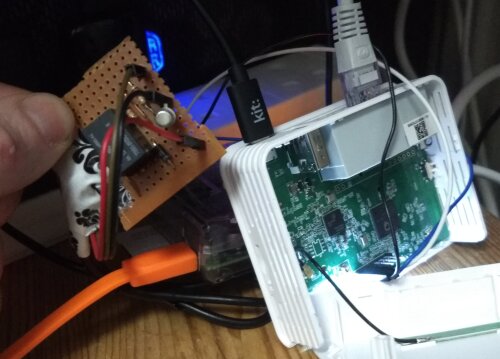 I rebuilt the computer-controlled USB power cable from last summer, because some time between then and now half the cables fell out and it wasn't immediately obvious where to put them back. This time I dun it on stripboard with soldered connections, but I connected it to a GPIO pin on the Raspberry Pi instead of using an Arduino. Because I need the Pi anyway and why needlessly multiply entities? That went pretty well except for the bit where I killed the transistor by failing to clip the legs until sometime after bending them to touch each other and applying power. Lesson learned.

The thing you see it plugged into is a second GL-AR750, because the first one is now serving my family's Internet needs (using OpenWRT, I am not in a dogfood situation here) and can't really be unplugged just so I can play with it (because that would be something closer to a doghouse situation). One piece of good news (maybe not actually new news, but I only noticed recently ) here is that the Linux kernel for said device has now been ported from the ar71 subarchitecture to ath79, which means it now uses device tree files instead of hardcoding where all the hardware bits and bobs inside it are.