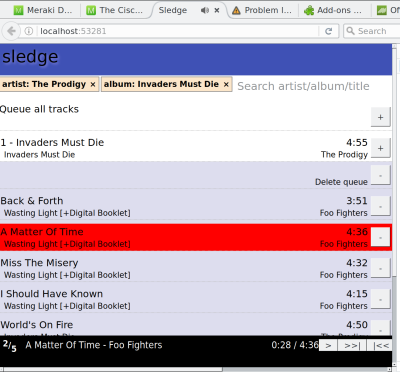 In between my ongoing attempts to buy a house I am still playing on and off with making Sledge into a thing I might actually want to use. First on the list is showing the currently-playing track name and not just its length. Second will be some slightly nicer play/next/previous buttons. Third, maybe making it more robust against pressing "refresh". Ongoing and not yet finished, stripping out the cheesy CSS text shadows etc to make it look less like a 1990s OSF/Motif application and more like "flat UI" - a design trend of which I thoroughly approve. I will be terribly disappointed when the fashion pendulum swings back towards requiring artistic skills for a web page to look modern, because (as you can see) I have none.

(Why is this blog entry titled "Plank"? What else would you call a flat sledge?)

I can't believe it's not buttons#

"Second will be some slightly nicer play/next/previous buttons". As predicted. I don't claim they're pretty, just that they're an advance on what went before.

Next: through a combination of dogfooding and Agile backlog reprioritisation, I as the product owner and customer representative have determined that I as the development team should next tackle "make it not behave apparently randomly when adding tracks to the playqueue after it has played what was previously in the queue".

Maybe in the process I can reduce the number of arbitrary reference cursors that are littered thoughout it.